COP26 took place in Glasgow in late October/early November, with some commentators and participants suggesting that it represents the last opportunity for the world to successfully meet the Paris Agreement objectives, limiting global warming to well below 2C, preferably less than 1.5C.

The Intergovernmental Panel on Climate Change (IPCC) published the first section of its Sixth Assessment Report on Climate Change, ‘The Physical Science Basis’, hailed by the UN Secretary General as “Code Red for Humanity”. The report declared it is “unequivocal that human influence has warmed the atmosphere, ocean and land”, and said that even in a best-case scenario of significant reductions in greenhouse gas emissions, the world will temporarily reach 1.5ºC of warming within 20 years.1

220 financial institutions across 26 countries are pressing 1,600 companies to set emissions reduction targets through the Science Based Targets initiative (SBTi). This aims “to ensure that corporate ambition is independently verified against the de-facto industry standard for robust and credible climate targets”. The letter was sent to over 1,600 companies worldwide, including Anhui Conch Cement, China’s biggest cement manufacturer; Hyundai Motor Company; Associated British Foods; Nippon Steel; Tata Steel; Lufthansa and Samsung. The initiative was coordinated by CDP, which runs a disclosure system for investors, companies and other stakeholders to manage environmental impacts.3

New initiatives, by policymakers and other stakeholders, focused on efforts to price carbon – thereby encouraging reduced carbon emissions. The Organization for Economic Co-operation and Development (OECD) called on the European Commission to back a global plan for carbon prices, according to reports , as the EU continues with its plan to apply carbon pricing to emitters within the EU, and to apply a carbon border tax on imported goods (see Europe news section). Also in the quarter, China launched the world’s largest carbon market, allowing greenhouse gas allowances to be bought and sold in a national emissions trading scheme. The market only includes China’s energy sector for now, and has been deemed relatively limited and cautious, relative to more established emissions trading schemes such as in the EU.5

Separately, there was progress on initiatives focused on voluntary carbon markets. The high-profile Taskforce on Scaling Voluntary Carbon Markets (TSVCM), an effort initiative by Mark Carney, UN Special Envoy for Climate Action and Finance, released its proposals for a new governance board and new standards for trading carbon offsets.6

Similarly, the Voluntary Carbon Markets Integrity Initiative (VCMI) was launched in July with co-funding from the UK Government and Children’s Investment Fund Foundation; it is also supported by the COP26 Presidency and United Nations Development Programme. The VCMI is specifically focused on addressing credibility concerns “by working on a number of critical gaps in voluntary carbon market integrity”.7

A $3.5trn budget reconciliation bill (the Build Back Better Act8) and $1.2trn infrastructure bill (the Infrastructure Investment and Jobs Act9) made progress over the quarter, but remained a focus for intense political debate at quarter-end. Both include significant initiatives focused on climate and other sustainability factors.

The Build Back Better Act would see government investment in green energy, healthcare, education and childcare. Late in September, the Clean Electricity Performance Program (CEPP), a $150bn plan to establish rewards and penalties to cut emissions in the electricity sector, passed out of the House Committee on Energy & Commerce – a significant step towards its approval as part of the Build Back Better Act. Under the plan, from 2023 to 2030, utilities would receive payments if they increase clean energy supplies by 4% annually, or submit payments if they fail to achieve that target.

In the context of these two major pieces of legislation, the White House announced that President Biden would sign an executive order setting a target for 50% of all new vehicles sold in 2030 to be zero-emissions vehicles, including battery electric, plug-in hybrid electric, or fuel cell electric vehicles.10 Subsequently, the White House also announced efforts to cut aviation emissions by 20% by 2030, through the production and use of sustainable aviation fuel.

The Securities and Exchange Commission (SEC) published a sample letter to illustrate the comments it might issue to companies about climate-related disclosures.12 Issues it highlights includes whether firms' ESG reports align with climate change disclosures in annual reports; the need to disclose material litigation risks related to climate change; indirect consequences of climate change, where they are material, on factors such as demand for goods that produce significant greenhouse gas emissions; and the impact of the physical effects of climate change on operations.

The Commission has set out its proposal14 for the EU to cut greenhouse gas emissions by 55% from 1990 levels, by 2030. This represents a step change in ambition setting a new, more aggressive waypoint for its ultimate objective of achieving neutrality (or net zero carbon emissions) by 2050. The policy is a material advance on previous 2030 objectives of a 40% reduction. The plan includes proposal across a wide range of economic areas and is intended in part to keep pressure on the international community to stem the rise in global temperatures to no more than 1.5C.

The EC intends to issue a green bond in October15, the first of a planned €250bn green bond package, itself part of a broader €800bn COVID-19 recovery fund. The issue is expected to be heavily oversubscribed. At least 37% of the recovery fund will be required to be applied to green aims, and Brussels will regularly review how individual countries are putting the funds raised to work.

The Swiss Federal Council has decided to require public companies, banks and insurers with more than 500 employees or with assets in excess of CHF20m or turnover greater than CHF40m, to produce Task Force on Climate-related Financial Disclosures (TCFD) reports16. A consultation will take place until summer 2022, with implementation expected from 2024 for the 2023 financial year. Within the main financial reporting, companies will then also have to report on the climate and environmental impact of its business, in addition to the financial risks associated with its climate-related activities.

Following the Chancellor’s announcement in November 2020, the UK government issued its first green gilts17 in September and October 2021. The bonds are the first steps in a wider green financing programme, aimed at providing funds aimed at projects that have an objective of benefiting the environment. Further issuance is expected which have clearly defined environmental benefits. There we will also be an issue of a distinct Green Savings Bond, through the NS&I (National Savings & Investment) platform.

In October, the chancellor published his roadmap18, which represents the first of three phases of the “Greening finance” stream, aiming to deliver the Green Finance Strategy, announced in 2019. It introduces new economy-wide Sustainability Disclosure Requirements (SDR)19, in addition to providing more detail on the UK Green Taxonomy. The SDR combine existing and new reporting requirements on sustainability characteristics, with the aim of improving, bolstering, and clarifying information disclosure from businesses, through the asset management sector and on to investors.

In its Green Claims Code20, the UK Competition and Markets Authority, has sought to advise businesses how they can achieve a good balance between communicating their green credentials, while reducing the risk of making claims that could be considered misleading. Their recommended six principles seek to set out how businesses should be clear, truthful, fair and fulsome in their claims. Businesses now have until the start of 2022 to ensure their environmental claims comply.

In July, the FCA published details of what it expects from providers of ESG and sustainable funds, regarding design, delivery and disclosure21. The guidelines were published following broad consultation with key stakeholders and consumer research and aim to ensure that claims made are clear and not misleading.

A global initiative that seeks to improve the integrity of carbon markets was launched, with the aim of ensuring their role in meeting Paris Agreement 1.5C maximum global warming objectives credible. The VCMI22 first look at how companies can ensure any “net zero” or “carbon neutral” claims are justifiable, robust and grounded in science-based actions on reducing emissions. It is supported by the COP26 Presidency and the United Nations Development Programme and the first consultation with stakeholders including governments, business, Indigenous Peoples’ groups and others is expected to bring forward recommendations for guidelines on carbon credits use in late 2021.

*There were 16 responsible investing related issues by the IBRD, in different currencies, in Q3 2021, of which this was the largest.

Our analysis of 70 impact bonds issued in Q3 2021 resulted in the following ratings: 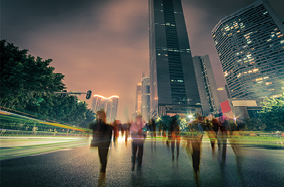