September 28, 2022 Fixed income
With the US seeing two quarters of negative growth, inflation headwinds and geopolitical uncertainy, the possibility of a shallow recession cannot be ruled out.

However, bottom-up credit fundamentals are relatively strong. We believe investors can access value in credit by sticking to "secular winners" and areas still recovering from the height of the pandemic.

A recession is not certain yet, but the odds are finely balanced

The US economy shrank 1.6% in Q1 and 0.6% in Q2 (in real terms). At two negative quarters, this is often considered a “technical recession”.

However, official US recessions are determined by NBER (National Bureau of Economic Research), based on its assessment of the depth, breadth, and length of declines in economic activity.

H1 2022 most likely failed to reach its threshold for recession. H1 GDP may yet be revised upward and gross domestic income (GDI), another measure of economic growth, actually rose in H1. Further, the unemployment rate is still near record lows at 3.7% and wage growth averaged 5.4% in H1, versus pre-pandemic norms of 2% to 3.5%.

Nonetheless, a looming recession cannot be ruled out as consumer spending (~70% of GDP) is being eroded by falling real incomes (with CPI at 8.5% and wage growth at 5.2%).

For now, consumers can fall back on excess cash buffers amassed during the pandemic (which reached a peak of ~$2.7trn relative to the pre-pandemic trend1), but we expect consumers to spend down this excess cash by H1 2023. As such, a lot depends on whether inflation and wage growth converge by then.

Crucially, if there is a recession, we expect it to be shallow

Leverage levels are low, which is unusual before a deep recession

Historically, deep recessions often followed years of excessive leverage and animal spirits, such as the debt-based stock market speculation of the roaring 1920s that preceded the Great Depression, or the housing and consumer debt bubbles in the run up to 2008.

However, consumer and corporate leverage is been conservative by historical standards (Figures 1 and 2).

In our view, nominal GDP growth could be the indicator to watch, and it is currently running at 7.8%. We believe it will remain positive even if a recession occurs.

Since World War II there have been 12 recessions, and nominal GDP was positive through seven (Table 1). All these recessions were mild or moderate, apart from the stagflation crisis of the late 1970s and early 1980s.

Table 1: Most recessions in which nominal GDP was positive have been mild to moderate4

The recent pandemic makes historical comparisons challenging, although perhaps it best resembles the wartime disruption. Parallels between the post-World War II recovery, which preceded the recession of 1948 and 1949 are particularly striking.

For example, 1948 was also a period of normalizing consumer demand (as pent-up desire for goods was met quickly after the war), domestic and global supply recovered after wartime (resulting in rising inventories), the labor market tightened (as those employed by the war effort returned to the real economy), consumers were flush with cash due to fiscal stimulus (then a result of the GI Bill) and authorities tightened monetary policy.

It was a famously mild recession in US history, which we believe bodes well for today.

Credit markets have held up well to shallow recessions

During the seven recessions in which nominal growth stayed positive, nominal corporate profits fell only 1.6% on average, with the worst decline at 14%. 41% of the time year-on-year profits did not fall. This is intuitive as rising nominal growth at least implies top-line growth.

During the other, generally more severe, five post-war recessions, corporate profits fell far more – at 9.9% on average, with the worst decline at 36%. Profits only stayed positive 22% of the time5.

Shallow recessions have had a relatively moderate impact on credit spreads, particularly when compared to severe recessions, such as 2008 (Figure 3).

Figure 3: We have recent experiences of shallow and deep recessions6

Today, we believe corporates look particularly well-placed as they locked in low fixed rate coupons over the last few years, unlike most of history. During the 1970s inflation crisis, for example, most corporate debt was floating rate and supplied by banks, leaving borrowers particularly vulnerable to rising rates.

However, the development of the corporate bond market means companies generally have fixed rate liabilities today and ~40% of today’s outstanding investment grade and high yield corporate debt was raised in 2020 and 2021, when yields were at historic lows (Figure 4).

Further, corporates have largely been passing inflation costs onto consumers, helping to sustain their margins.

Although the economy itself may not be about to enter a deep recession in our view, there are undoubtedly credit sectors that are effectively in a recession, while others look strong to us.

Some credits are on a secular uptrend or downtrend. However, in other cases certain sectors are renormalizing following the height of the global pandemic (Figure 5).

Secular winners (the top right): Software companies, for example, have seen consistent growth over the last 20 years (Figure 7), and we expect this would be uninterrupted during a recession. If anything, as software spending has the potential to improve worker productivity, and thus effectively reduce labor costs, companies may see fit to invest more in software during a recession.

Figure 7: Software investment has been a clear example of secular growth9

Secular losers (bottom-left): Some sectors, like brick-and-mortar retail and traditional media are in secular decline due to technological disruption. A recession would only speed up these trends.

Normalizing – recovery (top left): Auto production is finally starting to emerge from supply chain headwinds. Elsewhere, the travel and leisure sectors are returning closer to pre-pandemic norms. We expect this to provide a buffer against the impacts of a recession.

Normalizing – moderation (bottom right): Some sectors are being negatively impacted by the end of the pandemic. These include durable goods – which boomed given a glut of homebuying and time spent at home. While this is not a sign of economic ill-health, it is a concern for durable goods manufacturers and retailers, particularly if a recession transpires.

Do not rule out "risk-on" events, and be positioned to take advantage

Investors need to be open to the prospect of positive surprises. For example, a surprise resolution to the war in Ukraine would imply more normal global energy prices and greatly improved growth prospects across the world. Further, lower-than-expected inflation into year-end could result in a less hawkish Federal Reserve.

In our view, investors should remain invested in the most robust parts of the credit markets, as it offers the potential to weather the downside of a potential recession and participate on the upside potential of any risk-on event. 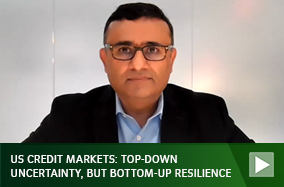 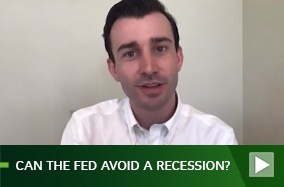 Video: Can the Fed avoid a recession?
Watch now 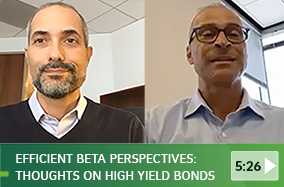